3.0 During the next 2 weeks we will aim to charter a complete specification of the original Grameen Bank franchise and why it took 7 years (1976-1983) for Dr Yunus and his other 3 founding partners to build.

This week we will aim to map a complete blueprint of specifications that became integral to the service franchise. Next week we will charter some Q&A -ways year in year out of checking how to action learn with the Bangladesh Grameen brand franchise essential to multiplying trust through  anyone who ever relates to the franchise - as customer, owner, employee, society or worldwide correspondent

Definition franchise - what is replicated by every service team at every location or access point that a service is lived.

IS IT UNUSUAL FOR FOUNDERS TO TAKE 7 YEARS TESTING A SERVICE FRANCHISE BEFORE MASSIVELYREPLICATING IT?

NO, but Yunus and his 3 founding partners evolved franchise through a particular combination of chalenges

3.1 Developing a three-in-one service: at every centre of 60 poorest villagers :

range of financial services and weekly practice of them

the 60 villagers own market space 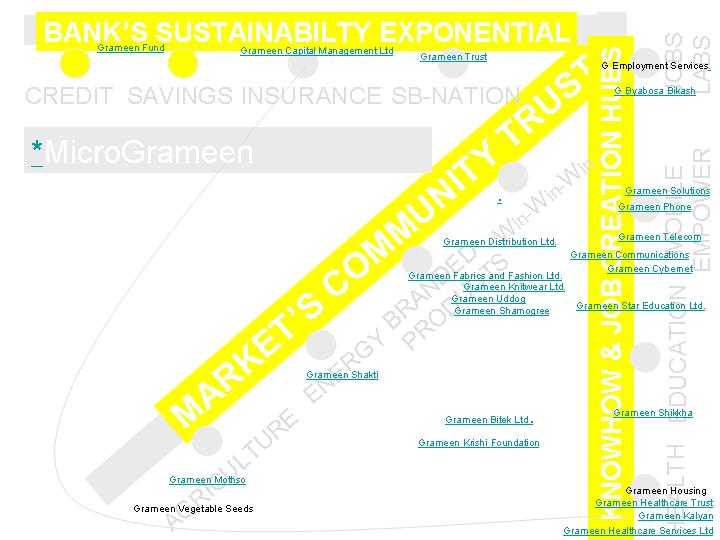 To be on the same map as dr yunus integrate yellow components first - ie 3-in-one facilities of centre to practice members own banking, market and knowhow hub. Yunus insists that from the moment credit is cserved , savings must be too. In a member owned bank the first dollar saved buys a share in running the bank. While Yunus first thought his concept of banking for the poor was mainly increasing the productivity of  village mothers lifetimes, they voted for a different idea - find the greatest investments a social business entreprenur has ever made in the future of our net generation. It took half a generation 1976-1996 to transition from being mainly the most econooical savings bank to making the starting to make the greatest pro-youth investment ever made - village phones, village energy, nurses as the 21st C most trusted information grassroots  networkers...

3.2 A model defining system dynamics such as :

what the service team does every day

3.3 Remember each service franchise replication from 1983 was to be built from nothing by sending out a small team initially 3 people (a manager, a main assistant and a housekeeper) to build a base to live as well as maintain booking records and from this base "centres" to serve villagers (assume zero infrastructure ie no electricity, no sewerage systems, pathways where rickshaw is often only form of transportation)

3.4 Before we elaborate on what franchise emerged, place your mind in the poorest new 100+ million perosn nation in the world and anticipate issues that 7 years of experimentation transfomred round

changing idea of target customer from 50% women, to over 90% women and to customer-owner

resolving conflicts both as a service and a social innovation:

3.4.1 as a service innovation grameen was aiming to replace loan-sharks as the rival competition and to celebrate a new to the world idea- that the poor are bankable through community trust even though not one customer has any collateral

3.4.2 as a social innovation: grameen was aiming to change the religious view of a village woman from someone expected to lead a very isolate life (not leaving the village, not involved in any business transactions, typically not having received enough education to be literate) to an income generating (self-employed) "microentrepreneur"

Important note on staffing grameen: during the 7 years of developing the franchise grameen had to negotiate a service culture which started with only women employees of grameen can go and look for female customers to the most female culture of any service I have ever stidied but to be replicated by men who were literally to begin each new franchise across the rural nation of bangaldesh with next to nothing other than a little money and what they could carry -reference all of this founding responsibility fell on the shoulders of dr yunus first female student who becamke a founding partner of Grameen Mrs Begum 45 minute transcript also available - source yunus10000 dvd - free distribution to students- made at grameen bank hq in dhaka by norman macrae family foundationsummer 2008

q1 what example do you start mapping this with?

then in august usaid convenes its first global education summit

cm1 my 5 cents worth: i prefer to start with my father's suggestion of 7 years of studying bangladesh -both grameen and brac - with methods like dvds interviewing bangladesh entrepreneurs shared with 10000 young people -once these contexts are in my mind i find discussions with students at MIT and out of alabama most help me -where does investment in youth inspire you most?

first massive innovation exercise I take away from grameen is:

start by making a 3 dimensional diagram to integrate 3 types of services:

1.1 what sorts of financial services

1.2 what sorts of ownership of community market or value chain

1.3 what sorts of knowledge hub

regarding 1.1 they insisted on serving savings at same time as credit and the first dollar saved became right to vote as equity holder in the bank

by choosing village mothers the first aim was to free productivity of a group whose lives were in effect chained by dowry to breeding children and being stuck in a rural hut; but over half a generation these members turned grameen into a youth investment bank as that was what they voted its sustainable purpose to be- whence starting in 1996 greatest investments by youth investment banking ever made village phones with soros, village energy with knowledge of president carter's original solar advise neville williams

brac's approach to the poorest owning value chains was interestingly win-win to grameen- instead of owning place markets in the village, brac redesigned whole market value chains an approach usaid first declared  www.feedthefuture.gov  was adopting in 2010 - eg poultry where brac ientifies 5 main jobs that sustain decent living wages and microfinances over 100000 people to adopt one of these 5 job franchises

what becomes interesting is how mobile connectivity changes all of this - while yunus comes up with wizard apps , brac is more likely to use mobile to redesign total operations across a value chain - its dna is both about the blueprints enginners use to communiccte in depth and breadth, and with over 50000 schools to run it has arguably the greatest network of curriculum competence ever linked in

in any event now in the 2010s its pretty clear what markets we need to revolutionise for sustainability of our next generaton, whether you start with maps inspire by above models or somewhere else massively collaborative

energy and agriculture waste  - green it localise its productivity and access, nutrition it

over the next month Norman Macrae Family Foundation 1 2 invites anyone interested to help edit the bare bones content of the curriculum of what to explore first at forum of 1) grameen http://globalgrameen.ning.com and 2) brac http://bracnet.ning.com - if you have visited coursera you will know that the building blocks of its massive open online curriculum are as simple as a set of lsides and being able to youtube -so anyone with practices to share can be a curriculum builder - however even before doing that I am interested in massively co-editing written scripts and emerging first pictures around which people can map links 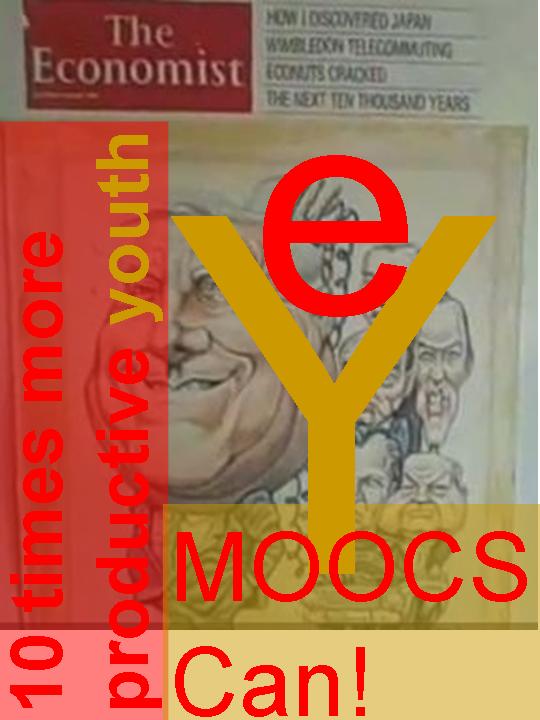 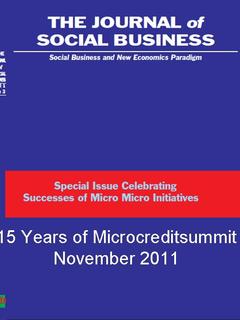